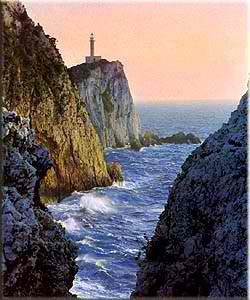 At the cape of Dukato you will find one of the most famous cliffs of antiquity, probably the Homeric “white stone”, with white rocks at a height of 60 meters above the waves of the Ionian Sea. In ancient times (1200 BC), they made sacrifices to appease the gods and the Spirit of Tempest. Later (400 BC), they replaced the victims with offenders who were given salvation opportunities. Before they threw them off the rock, they tied birds and feathers around their bodies for a smoother landing. If the offender survived, he was given his freedom.

In the 6th century BC the tradition for the leap of love was widespread, as the lyrics of many ancient poets reveal. This was what was commemorated by Sappho, the great poet of antiquity, and that was where she allegedly leapt to her death. The myth reaches our days and is therefore called Kavos of Kera. Today there remains no trace of the temple of Apollo, because that is where the lighthouse stands.

The lighthouse was built in 1890. The tower height is 14 meters and the focal height of 70 meters.